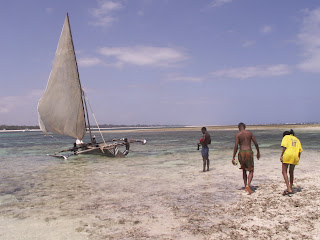 While in Mombasa we were excited that our friends from Tanari, Steve and his wife Lizzie, could come spend a day with us. They had heard about the sand island a short distance off shore from our hotel and thought it would be fun to come down to join us on an excursion. One of the side benefits of having them visit us was street cred. Kind of. Steve and Lizzie are Kenyans. Before they arrived the beach boys wouldn’t believe that we actually live in Nairobi. Even when we spoke to them in Swahili. But when our black Kenyan friends came to the beach with us we were suddenly more accepted.
The idea behind the visit out to the sand island was to not only to enjoy a nice ride in a sail boat but to also snorkel over the live coral reef which the island was a part of. Before Steve and Lizzie arrived Scott had bargained long and hard to get us a package that included the boat ride and masks and snorkels for the four of us. So, when our friends arrived we showed them around and then took them to the beach for our pre-arranged trip. The boat boy, Hassan, assured us that everything was set. Steve talked with him in Swahili and confirmed that we were in agreement. So we wade out to the boat and hop in for the ten minute ride to the reef. Once we get there we asked Hassan for the masks and snorkels so that we could go check out the reef and the fish. He runs to the boat and pulls out one grimy mask. Scott asks him where the other three are so that we can all go. He scrambles for an answer and then comes up with the solution that he will go borrow them from a group of Europeans in an expensive charter boat. Hassan’s efforts are valiant, but he comes back empty handed. We had fun hanging out on the island/reef and searching for shells in the dead coral. But were sad to miss out on the snorkeling and seeing schools of fish. Moral of the story: you get what you pay for and don’t assume things will be taken care of, double check. 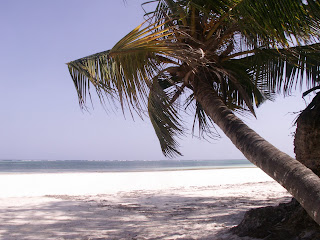 For our trip back we took the night bus home. We boarded at 10:30, left at 10:37 and arrived back at our own door at 5:45am. There was nothing eventful about this ride except for the entertainment. We had the DVD coach on the way back, again. So the tout had put a Jackie Chan movie in to start. Innocuous, largely appropriate for children, right? Good choice. The movie runs until about 11:30, I think, okay, sleep time. Oh no, there is more entertainment. The tout puts in another movie, it’s called ‘Prey’ and is about a white family getting systematically eaten by lions while stuck in their broken down safari vehicle. We’re watching this move while driving across Tsavo, the setting for the true story of ‘The Ghost and the Darkness’ in which lions systematically ate train workers until they were shot. Who made this choice? So I try to sleep through this. One of the main characters is a fifteen year old girl. What do fifteen year old girls do best? Scream. At the top of their lungs, every five minutes. So the movie finishes, I think, okay, sleep time. Wrong, the radio gets turned on. Loud enough that I can hear it through my ear plugs. After about fifteen minutes of anger and the same high-pitched song being looped again and again I get up and walk to the front of the bus.
“Do you think that you could turn that off so that people can sleep?” The tout fiddles with the radio and keeps covering it up with a sheet of paper in between pretending to fiddle with a knob as he realizes that I am not moving. He turns it down, fine, okay, I give him a dirty look that he probably couldn’t see in the dark and sit back down. We didn’t really sleep on the bus that night. 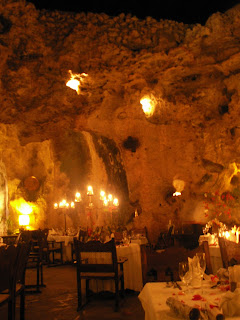 I got a tan, I read five books. We had a nice Christmas dinner of sushi and splurged on a beautiful six course New Year’s/2nd Anniversary dinner in a restaurant that is built inside a coral cave (with actual gourmet food, not fake gourmet, or African ‘I think this is gourmet, but really it’s not,’ food). So our time in Mombasa was overall successful. I realized that I had really wanted a break from Kenya, I had wanted to go to a place where the shower works all the time (our shower did not work regularly and one day stopped working altogether), no one tries to sell me anything or treat me differently because of my skin (where have I heard that before?), where the epic traffic is only an hour delay rather than a six hour difference. I didn’t get my break from Kenya, but I got my bikini tan back, remembered how much I love my husband, and was just thankful that we can afford to take a vacation.
Posted by Lara Davis Barnett at 11:27 AM