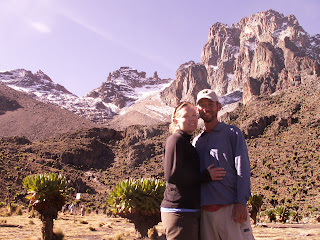 In old portrayals of early explorers and missionaries in Africa they seem to always be marching through the wilderness accompanied by a huge train of natives lugging the Westerner’s massive baggage. This image has always been somewhat distasteful to me, but it wasn’t far from our reality as we climbed Mt. Kenya. Lara and I were the only wazungu (white people) in our group of 86 that set out on our expedition. That’s right, 86 in one group. Of that group 51 were porters, four were cooks, three were professional guides, four were facilitators from Tanari (this included me, Lara, Muhia and Mwas) and the rest were reporters, photographers and other staff of Nation Media group. We made quite a procession as we made our way up the mountain.
We were enlisted to facilitate this trip because the CEO of Nation Media Group, Linus Gitahi, goes to our church. As a result of an earlier trip with Muhia, Linus wanted to do a trip up Mt Kenya to help “demystify the mountain” for Kenyans. Like much of the rest of the beauty of the country, Mt. Kenya is enjoyed by myriads of Westerners and few Kenyans. So the thought was to send some journalists to experience the mountain and send back live reports to tell the story.
As we got closer to the trip the marketing people at Nation Media had the idea of using the trip to raise money to feed the millions of Kenyans struggling to find enough to eat. So it was decided that we would set the goal of raising 8 million shillings (about $100,000) or 1 million for every 1000 feet of vertical ascent. So now, in addition to stories about the mountain, we were on a major publicity campaign to “raise a mountain of food.”
In case you hadn’t guessed by the fact that there were 86 people on the trip, this expedition was incredibly different from the ones that Lara and I have led in the past. The trips we have led emphasize spiritual growth through the challenges of simplicity, problem-solving, and community living in a small group. We are used to leading groups in which the participants have to carry all their food and equipment, do all their own cooking and find their way through dense woods. On this Mt Kenya trip participants carried nothing more than a daypack. They had chai and snacks waiting for them when they arrived at camp as well as three hot meals a day served to them with no effort of their own. They slept in huts where they had bunk beds with mattresses. Essentially, they were spared all challenges except having to physically walk up the mountain.
Before long it became clear that many of the participants were woefully out of shape. Americans often assume all Kenyans are built like their countrymen and women who dominate the professional marathons and Olympic long distance runs. And, generally, this is the case with working class men. However, our participants were mainly from the upper middle class. Their girth reflected life spent sitting behind a desk. They don’t walk to work or engage in any physical labor. These guys represented a growing group in Nairobi, Kampala and Dar es Salaam that have succumbed to the sedentary lifestyle of the West. It was abundantly clear in the pace they set and in the amount of complaining about aches and pains. You may notice that I referred only to men who were out of shape. That is because of the four women on the trip, three had no significant struggles and, in fact, were among our strongest hikers.
A peculiar feature of this trip was what happened when we arrived at camp. Most of the group would scatter to prepare their stories. They would retrieve their laptops from the porters that carried them and start typing up a story. The newscasters would prepare their monologues and then give them in front of a camera. Then they would set up the satellite device and send their stories in. It 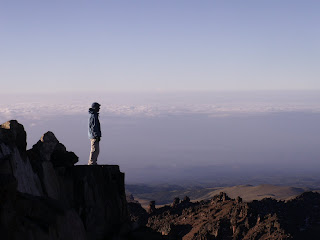 kind of took away from opportunities to bond as a group or to debrief the day.

When it came time to sleep we found that the benefits of staying in a hut had to be weighed against some serious drawbacks. The walls were so paper thin it was almost like sleeping in one big tent with forty other people. Of course, one of Murphy’s laws is that the people who snore the loudest will always be the first ones to fall asleep. So we were serenaded by tremendous snoring complete with sounds that I swore only happened in cartoons. We were also woken more than once with a light shined in our faces and desperate calls for a doctor. The emergency turned out to be an older man who couldn’t get to sleep. So, apparently he wanted others to join him in his sleeplessness.
The perils of staying in huts also included over booking. One night there were no beds so Muhia, Mwas and I had no option but to sleep on an icy, concrete floor. On the last night before our summit ascent we slept in a cramped, ridiculously over booked hut which also doubled as a kitchen. This combination led to a marked shortage of oxygen. This is of course the last thing you need when attempting to sleep in the already thin atmosphere at 14,000 ft. Needless to say, it made for a rather sleep deprived night with quite a few of us making midnight excursions to empty our stomachs among the boulders.
As with any wilderness trip, we had the anchors – the people who drag the group back. One, a journalist from Uganda, complained constantly. He proudly proclaimed that he never did any physical exercise. He questioned why anyone would want to put themselves through the torture of climbing a mountain. My appeals to the beauty, the bonding, and the challenge were dismissed. Then I pointed out that our efforts were going to raise money to feed millions who were starving. Our struggles on the mountain would help many who were suffering. He asked, “Why should one person suffer for a whole bunch of people he doesn’t even know?” I answered, “I believe one man suffered and died for the whole world.” He didn’t respond then, but later he told me that my walking with him and encouraging him really helped. Obviously not too much, because the next morning he quit and walked out the way we had come. It was sad to see someone give up simply because he lacked the fortitude to persevere. You can read the report he wrote about the trip here. http://www.monitor.co.ug/artman/publish/sunday_life/The_gruelling_tortuous_ascent_of_Mt_Kenya_79492.shtml (notice that there is a lot of detail about the first days but none about the summit)
Another group member always seemed 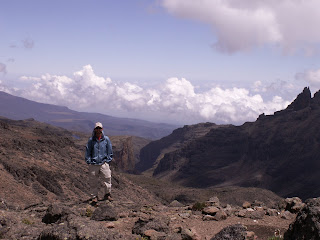 to end up in the back no matter what we tried. Everything we tried to help her out or to get the group to stay with her proved unsuccessful. As the afternoon dragged on, the woman would shuffle a dozen steps or so and then stand catching her breath for a few minutes. One participant got so anxious to get her to our campsite before nightfall that he began giving her piggy back rides. He later sent for porters to come back to help us and they took turns carrying her as long as they could. I didn’t feel our situation was that desperate, but they often didn’t listen to me or the other facilitators.
This woman who was carried didn’t seem to be humbled by her experience, but a couple other members of our group were. One of the news anchors, Robert, reminded me of Will Ferrell’s character in Anchorman. I could just imagine him saying, “I don’t know if you know this, but I’m a pretty big deal around here.” He wanted everyone to think he was a ladies man, but he seemed like he was really a bit of a mama’s boy. The first couple days he seemed determined to show how strong he was. He pushed as hard as he could, racing up the trail. But then on day three the altitude hit him. He became violently ill. While before he had always been at the front of the group, now he trudged along in the back.
In very vague terms he talked to me about making a deal with God about pushing himself to the limit. Robert thought that hiking as hard as possible entailed testing to see what he could handle. I told him that he should be careful about what kind of deals he makes with God. I also pointed out that God often chooses to test us through adversity, that maybe the day of struggling through illness was a greater test than feeling great and hiking fast. This conversation led to several more on a similar vein. Robert always talked about God very ambiguously. Towards the end of the trip he talked about wanting to make serious changes in his life. Other than quitting smoking he never revealed exactly what changes he wanted to make. He talked to me about holding him accountable, but my efforts at follow-up have had no response.
Another participant who was humbled by God on the mountain was William. William is one of the lead photographers. He too was really strong at the beginning of the trip, but hit the wall once we got to the high elevation. Muhia, our mountaineering expert, diagnosed William as having high altitude pulmonary edema (HAPE) and could die if he didn’t come down to a lower elevation. William was carried down in a stretcher by a group of porters and was later airlifted to a hospital. This experience definitely humbled him. I’m not sure if it was the fact that he was near death or perhaps the realization that his personality was so abrasive that his co-workers actually delighted to see him brought low and the porters threatened to leave him on the mountain, but William seemed to come out of the experience a changed man. 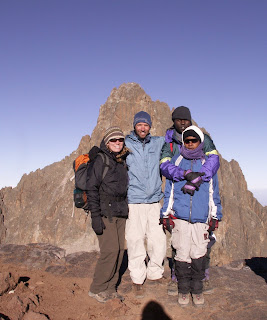 After all was said and done twenty-one of the Nation Media participants made it to the summit of Point Lenana. We enjoyed a beautiful sunrise at the top and took plenty of pictures for the newspapers and television. Several of the anchors filed live reports as well. It was evident that many of them were quite proud of their accomplishment. Most of them were stretched out of their comfort zone in one way or another. As for what kind of lasting change or growth will come from this experience, who really knows. At the very least we helped this group and through them thousands of viewers and readers experience the majesty of God’s creation on Mt Kenya. We also helped to raise a quite a bit of money to help the starving people of Kenya. To top it off, Lara and I got to enjoy a beautiful week of hiking together. Not a bad job, if you can get it.
Posted by Lara Davis Barnett at 9:36 AM