Earlier this evening I leaned my head back against our couch, the one luxury here in Kenya that I do not feel guilty about owning, and wished for all the world that I could fart and take a hot shower or even better a hot bath. I felt as if a small garden gnome had plugged a bike pump into my bellybutton and gleefully jumped up and down on it for about an hour, making my twenty weeks pregnant abdomen feel like the most uncomfortable and tight place in the world to dwell. We woke this morning to a power outage, a daily occurrence in Nairobi, and later found the power return but only at a dim brown half light. It remained this way for the rest of the day. We left in the afternoon to go workout at Rosslyn’s gym and hoped that upon our return that we would have full power. Alas, it was not there still dim and ineffective. We quickly revamped our dinner from oven baked quiche to something we could cook on our stove. My spirits sunk in a bit, I could tell power would be elusive for quite awhile.
Looking at an evening of semi-darkness, part of me thought there would a good way to take advantage of this situation and I could sense my dear husband’s amorousness. Unfortunately this possibility was ruined by the fact that Gnorbert had done his worst to my insides leaving me feeling like an overzealously blown beach ball. At the advent of my pregnancy my libido disappeared. It’s as if it stood up, dusted off her jeans and said, “Well, my work here is done, I’ll see you kids in nine months, ten months, if that labor is a rough one. Have fun now, ya hear!” Well if you stuck around maybe we could.
We checked with our fellow American neighbors, Jill and Nate, if they were in the same predicament, they answered the door headlamps ablaze and I knew the answer. Right after dinner I could see a dim light out of our door, the hall lights in out apartment building were on downstairs, I smacked the light switch for our upstairs hall lights and low and behold they blazed to full blinding light. I cried out in indignation and frustration, what was this? Everyone else had power but us upstairs dwellers? Is this a conspiracy against the foreigners? And how is this possible?
Jill and I marched downstairs to see if the guard was about and he could solve our problems, all the lights were working downstairs. Through stilted and slow English we explained that our lights were not working. He came upstairs and Jill demonstrated that they were having a brown out. He said he would call the handyman, he returned shortly with a plastic chair and an energy saving light bulb. Jill and I had now taken to sitting on our well lit landing and discussing our days. Fatalism had conquered our spouses who saw no point in calling our landlord, because they wouldn’t fix it tonight anyway. As the guard returned with said light bulb Jill and I exchanged looks and shrugged, we could tell him that wouldn’t work, but best to let him find out on his own. He makes his discovery and disappears with his plastic chair and promises to call someone. Tomorrow will be a dim day as well. And perhaps without coffee, a true aggravation.
Scott calls our landlord who never picks up her phone until we’ve called atleast four times. She does not pick up. We resign ourselves to a dim night and return to our respective apartments. Again all I want is to fart and bathe, and I think to myself these are not horrible requests, these are not bad desires, these I don’t think, are even pampered American desires. I start water heating for the treat any traveler or developing nation dweller has been treated to of a bucket bath. After placing the sufaria (cheap aluminum pot) on the stove full of water I settle into our lovely couch and allow myself that one glorious sigh.
While in my dimly lit shower splashing hot water from a plastic tub over my shoulder I think this is why Nairobi is so frustrating. I gaze at the tub and think if I could just sit in a bathtub of this delicious brew for a half hour my abdomen would relax and deflate and my problems would melt away. But, no, we have a stand up shower, and there is not power enough to heat water so I can’t even have the reasonable facsimile of a hot shower. You almost have everything you want, hot water, electricity, etc., but often it is taken out of your hands and is just there right outside of your reach. Like right now, there are blazing lights RIGHT OUTSIDE OF MY DOOR, LITERALLY!!! And it’s not taken for good reasons, usually because someone was incompetent or stole something. We keep hearing that the rains have failed in Nairobi, there is drought because the rains have failed. Apparently the year has been drier than normal, but this dry year has sure yeilded more in the past month than they see in Nevada all year long. It's not that the rains have failed, it's that Nairobi has failed to properly catch the water that has fallen.
My husband just leaned over me and made a smart suggestion of taking advantage of the situation, I told him of what Gnorbert hath wrought. Damn pointy capped little beast, he probably crossed some wires as well…
Written by Lara
Posted by Lara Davis Barnett at 11:07 AM No comments: 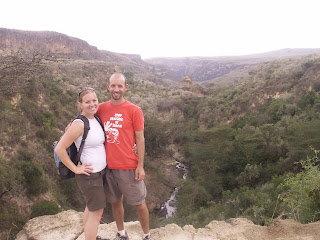 Written by Lara
Posted by Lara Davis Barnett at 6:02 AM No comments: