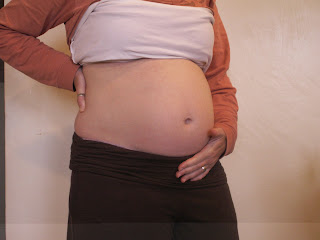 “Technically a pregnant woman is eating for two. But it’s important to remember that one of the two is a tiny developing fetus whose calories are significantly lower than mom’s- a mere 300 on average a day, more or less. So if you’re of average weight, you now need only about an average of 300 calories more than you did prepregnancy – the equivalent of two glasses of skim milk and a bowl of oatmeal….What’s more during the first trimester you probably don’t need any extra calories at all.”
What to Expect When You’re Expecting, pg. 93
These words seem to me to be the mad ravings of a complete sadist. ‘Two glasses of skim milk and a bowl of oatmeal.’ I don’t know a single woman who only increased her caloric intake during pregnancy by ‘Two glasses of skim milk and a bowl of oatmeal.’
When you think of my metabolism during pregnancy I want you to picture a large pack of ravenous hyenas descending upon a kill during a time of famine. Picture the wicked and hunger driven glee as they destroy their new food. To compound that I want you to picture said hyena lying on his back after the meal bloated, sated, engorged lying about peacefully licking his chops. Now in two hours that fat animal will feel as starved as it did right before it’s feeding frenzy. Now this, if you can grasp the fullness of this beast within me you will understand how I feel and how my body has changed.
I have a sweet tooth, always have, but the belly aches of one too many cookie dough enhanced sleep-overs have taught me to enjoy my sweets in small portions. A few squares of chocolate here, a few spoonfuls of ice cream there. The other day I was making cookies and I popped a small ball of dough into my mouth and felt the beast rise up within me. It occurred to me that I could eat the whole bowl, this bowl that would make 4 dozen cookies. All of it. Before I was creating life in my womb that would have been an unheard of desire, for it would have left me curled in a ball on the cold hard tile floor of my bathroom with another kind of creature inside. I didn’t eat the cookie dough, I’d been reading too many warnings about glasses of skim milk and oatmeal.
Why do we as a culture have this obsessive need to quantify everything? Why would we tell a woman who is growing life in her womb that she only needs 300 extra calories? Or that in her first trimester while she’s growing a placenta, increasing her blood volume by 50% and a baby (however small that baby may be) that she may not need any extra calories at all? I ate more in my first trimester than I have in my second. I ate when I was hungry, drank when I was thirsty, and generally obeyed the raging beast that had taken over my once placid body. Every woman’s body is going to go about pregnancy differently.
In my first trimester when I would read the books I would start to panic about my expanding belly (thighs and butt). I looked about a month more pregnant than any of the diagrams in any books (I think that’s more owed to the fact that I am short waisted, not that I have been eating more than two glasses of skim milk and a bowl of oatmeal). But then I would talk to another woman about her experience and relax as I heard stories of maternity clothes at 8 weeks and gaining 90lbs over the course of a pregnancy.
Is it our ridiculous obsession with thinness? Being here in Kenya I have relaxed about the way my body looked. Kenyan women are touted for having a shape and described as beautiful when their figures are ample. I have been able to not think about my weight so much and enjoy the fact that a few pounds magically disappeared because of a lack of processed food in my diet. Guess I didn’t them anyway. Honestly I would feel fine about myself and then a friend would pass on a copy of People magazine and I would start to feel nervous about the size of my thighs compared to some new nymphet that was being touted as the new ‘it’ girl. I don’t even know who half the famous people are anymore, is that a harbinger of adulthood?
Then I got pregnant and grabbed a copy of ‘What to expect’ and in a time of life where I shouldn’t be worried about thinness at all I am again worried about gaining ‘too much’ weight. Even though before I never really actually struggled with being overweight, I just thought I was. Lovely body dysmorphia, the plague of all girls raised in southern California. Makes me want to punch the authors.
I am sure that people did conclusive and exhaustive studies on how many extra calories it takes to make a baby. And they came up with the magic number of 300. I want to make them all pregnant and see what they have to say about that.
Posted by Lara Davis Barnett at 8:59 AM