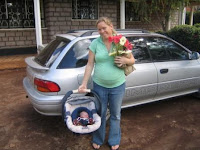 My luscious and full pregnancy hair started falling out about four weeks ago. The entire nine months I didn’t lose one hair. Now it’s coming out in little hairballs everywhere. I find it balled up in Emma’s fist. Stuck to my arm. Stuck to Emma’s mobile. Stuck to Scott’s shirts. I had a mild psychotic break and cut off about four inches, just took scissors to it and hacked. Then I made an appointment with a hairstylist. While she was cutting I changed my mind from, ‘just clean it up,’ to, ‘could you take off another two inches?’ I needed a change I was sick of my hair and people kept talking me out of cutting it off. I should never let people talk me out of haircuts. So now I have a bob type thing and have been assured that it’s not ‘mom’ hair.
I’ve been waiting with bated breath for my body to return to normal. I run. I occasionally throw myself down on my living room floor and perform some routine of calisthenics. Somehow I think this is going to shrink down the gushy belly that my pregnancy left behind. Every couple weeks I whip out a pair of pre-pregnancy pants and try them on. They usually get tossed back in disappointment. I blitzed a sales rack at Old Navy right before we left and bought a few pairs of pants that were a size up, because I knew I wasn’t going to be able to fit back into my work pants right away and would need something for the first several weeks of school. Last week thought I was grabbing the khakis that I bought in that guerrilla shopping attack, but realized in mid pant leg pull that they were a pre-pregnancy pair, I thought, eh, why not? And kept pulling. They fit!
Ah-may-zing. Little triumphs, I take them where I can get them.
Setbacks come in the shape of glimpsing my flaccid belly loll about my torso when I’m lying on my side or sitting down. Emma is in the stage where she likes to ‘stand,’ we hold her up by her little arms and she wobbles on her little legs, grinning all the while. The other day after nursing her I was ‘standing’ her on my belly, I looked down at my stomach and thought, ‘oh sorry kid, that’s like learning how to stand on a water bed.’ We practiced on the floor instead… I know it will never be the same, but I would take similar. Maybe no more linea negra, maybe a belly button that looks morelike a slit rather than a hole dug in the forest floor. Maybe a semi firm mattress instead of a water bed?
Posted by Lara Davis Barnett at 6:18 AM