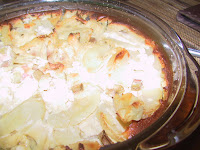 What you see here is failure to bake. I bought local Kenyan pears. The pears here have a texture that is bit more gritty and bit more mealy, the taste also has strong overtones of tree bark. One may ask, why would you buy those? I was hopeful and they were regrettably very cheap. I was shopping in a higher end green grocer and I thought, ‘surely these will taste better than the ones I’ve had before. Surely people don’t eat these tree pears on a regular basis, these must be better.’
I was wrong.
They sat dejected in our fruit bowl for a few days, and I finally had the time I decided to bake them into some kind of crisp. I had some leftover rhubarb from muffins that I had made and some fresh ginger. Flipping through one of my favorite cookbooks I found a recipe for ‘Pear Clafouti,’ a French dessert that is basically a pancake baked around fruit. Sounds good, right? While I was assembling the dessert for baking I was talking to Scott and re-counting a day that I could only describe as weird; a day that involved stomach upset, dizziness, angering emails, miscommunications, incomplete errands, successful conversations, and discovering that I truly am one size down in pants. A day so confusing that I wrote notes to explain everything that had happened to me. So there is a possibility that in baking while retelling this day I did something wrong. It can happen, I am easily distracted. I assembled it, told my story, listened to his stories of the day and popped it in the oven.
The ‘Pear Clafouti’ was supposed to bake for twenty minutes. I baked for an hour and half. Granted the power went off during this time. So who really knows how long it sat in my oven. My oven, that emits more heat to the outside than it does directly onto the food it’s supposed to be cooking. My oven, that regularly burns the tops of baked goods while leaving the insides mushy and frighteningly undone. Needless to say after I finally declared it done, meaning there was no liquid shimmering and sloshing in it’s insides, I pulled it out and realized that it was largely inedible. The ‘Pear Clafouti emitted a smell akin to rotten lemon juice mixed with vanilla extract. The pears had gone from mealy and gritty to mushy and gritty.
I sat at the table after dinner and in a haze of post-menstrual loss of eating common sense pulled it apart with my finger tips. At each piece of pear or pancake/flan-like mush that I popped into my mouth I questioned why I was eating it. I was hopeful. That it would get better. That I would not have just wasted money and good baking ingredients. I was wrong. Scott kept asking why I bought the pears. My guess is that they have more moisture in them than North American pears and it destroyed the rest of the dish. Combine that with the antics of a inconsistent oven and spotty voltage and you get gritty pears sitting in eggy mush.
The fork is Scott’s, as the pre-eminent wilderness guide in our relationship he seems to be more refined than me. As we picked he described a weave that he’s been seeing on the streets of Nairobi,
“So the front of the hair is plastered to the head. Then it sticks straight up and is like a fro, but not really and then about half way down it turns gold.” Cue the power outage. The lights blink on and off for a few moments which is new from the usual just cut into dead darkness. After the electricity decides to truly die,
“So it turns gold halfway down the head,” I urge him on.
“Yeah, and then it goes back to black.”
“Huh, weird, your headlamp is on the changing table. Where’s the other one?”
“I dunno, I give up.” Smartass.
The lights go back on. I stare down at my ‘Pear Clafouti.’
Then the lights go right back out.
Then they’re back on. ‘Pear Clafouti’ it’s time for you to meet the trash can…
Posted by Lara Davis Barnett at 10:01 AM