I bake to relax 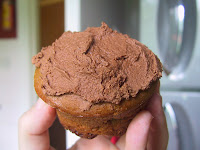 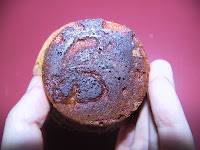 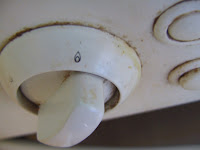 I bake to relax. I have noticed this in the past few weeks as the stress in my life has ramped up; more cupcakes, cookies, and muffins have appeared in our kitchen. Maybe it’s just because I like to eat the aftermath. As Michael Scott said, ‘you like to eat, baking is just a preamble to eating.’
One thing that I have been thankful for is because we had to provide our own housing we did get to buy our own things, including our own stove/oven. Homes in Kenya do not come furnished with a range or an oven. You have to provide them for yourself. So we bought our own cooker with an electric oven, big enough to fit a cookie sheet in, and I have benefited from it for the last two years. Our Rosslyn friends that live on campus have cookers provided for them, so I have been using my friend’s Rosslyn issue oven. It’s gas. I have never used a gas oven before.
Earlier this week I decided that I needed to bake, I’ve been thinking about Peanut Butter Cup cupcakes. These needed to happen. Before I started I eyed the oven. The temperature gauge on the oven does not have degrees on it. It goes from Little Flame to Big Flame, and most of the Big Flame is worn off. So this oven goes from Little Flame to Flame of Indiscriminate Size. Also this oven does not get just turned on, you have to light it. I asked my next door neighbor, Jessica, how to do this. She laughed and her husband asserted that it still scares him every time he does it. Awesome. She showed me that you turn the knob with the flames on it which opens up the gas and you stick the match in this little hole down in the bottom of the oven. A perfect recipe for blowing off your eyebrows. Jessica did show me that inside the oven there was a thermometer.
I made the peanut butter cake batter with chocolate chips and lit the oven, without blowing off any body or facial hair. I let it pre-heat, to 500 degrees. Big Flame. I turned it towards the Little Flame and thought about leaving the door open, I didn’t because I thought that make the temperature drop too much. It ‘cooled’ to about 200 degrees. I turned it up towards the Big Flame. ‘Heated’ to about 400 degrees. Okay, I get it, we just have to keep adjusting and checking. I may never get a nice a 350 but it looks like I’ll pass in on the way to the bank. Popped the cakes and on to the frosting.
In my head I had pictured rich peanut butter cakes and creamy dark chocolate frosting. I squished the softened butter into the bowl and pulled out my friends hand mixer to cream it until it was in pain. Her mixer had a European plug. The sockets are African. Our converters are hidden somewhere in the five massive already packed pieces of luggage that have taken up the Nipper’s playroom. Through a miracle of God I had a hunch that one was in a backpack, and there it was a blessed little multi-national plug. I got everything all plugged and fired it up. Whirrrrrrrrrrrrrrr, and it stopped. The plug was loose. I walked away for a few moments. Came back and decided that my miraculous multi-national plug maybe wasn’t so miraculous, so I tried holding the plug in place with one hand while mixing with the other hand. I fiddled with this semi-dangerous situation for a few minutes. I had to walk away again. Eventually I found the sweet spot and the mixer cooperated. This was odd because I had borrowed this mixer before and it never gave me a problem.
I followed a recipe that called for adding melted unsweetened baking chocolate to a vanilla butter cream. I dutifully melted some Cadbury baking chocolate and blended it into the frosting. I do know the difference between levels of chocolate: milk, sweetened, unsweetened. I have subbed them out in various recipes with varying degrees of success. Unsweetened chocolate isn’t available here. This recipe wasn’t kidding when it wanted unsweetened chocolate. I had to triple the amount of chocolate (which meant three different times that I melted chocolate and beat it into the frosting) and only achieved a middling brown color, not the dark velvet that I had envisioned.
As you can see the bottom of this little cake shows you that my varying degrees in the oven did not perfectly cook my cupcakes. They are done, too done. I think I saw 350 degrees once in the ten times that I checked the oven and turned from Big Flame to Little Flame. To all my friends who bake regularly with a gas oven, you are the burliest of bakers, the caber tossers of strong men, the ‘I hiked the AT all by myself’ of backpackers, I salute you.
Of course through all this I was manning my child who is in a ‘HOLD ME AT ALL TIMES’ phase. I would pick her up, plop her on the kitchen floor at my feet with some toy or safe kitchen accoutrement only to have her fumble it around for a few moments, whining all the time until I gave up, picked her up and tried, unsuccessfully to do whatever I was doing one handed. Oh, she also hates the sound of the mixer. Hates it. Screams. In total it took me three hours to achieve Peanut Butter Cup cupcakes, but I did and they were good. And now I will SIT DOWN to eat one.
Posted by Lara Davis Barnett at 4:20 AM