Jack Frost is nipping at my nose... 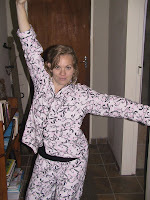 And about everywhere else for that matter. The coldest I have ever been in my life has been in Australia and South Africa. Not Chicago. Not Colorado. Not Wisconsin. Not Michigan. And not Minnesota. Australia. And South Africa. Strange, you think, because those are hot countries. Yes for most of the year. But for about two to three months they do actually have winter. Their winter is in our summer months of June and July. And often during the day it can heat right back up to livable temperatures. During the night however it can drop below freezing.
As we drove away from the airport on the Sunday night that we landed I could feel the cold soak into me through the car window. I started doing mental lists of the clothing I had for Emma and for myself. Would we be warm enough? Our Kenyan wardrobes full of short sleeves and sandals may not cut it here. I kept telling myself don’t worry because tomorrow might be warm. In Kenya the nights can be cold, but you can almost count on the days warming up.
When we got to the house the bitter snap that greeted us indoors was an unwelcome shock. I quickly buried my child in as many blankets as we brought. I told my husband that I was going to shower to warm up. The plan was to get nice and hot and then jump in bed. This was a severe miscalculation. The open shower, which would have been in nice in 80 degree weather was torture in near freezing temperatures. And all the windows were open. We disbelievingly slammed them all shut and I threw on my sweatpants and a t-shirt and jumped into bed, my tank tops and shorts that I had been sleeping in surely weren’t going to cut it here.
The next day proved no warmer. I have spent the last few weeks not being able to feel my feet or my fingers. Emma cries when I change her diaper or clothes because I’m sure having your warm behind wiped by human icicles isn’t the most comfortable. Even Scott yelps when I press my cold hand into the small of his back. To which I usually respond, ‘Take me somewhere warm.’ I’m sure this only strengthens our marriage.
I remember the cold in Australia being a shock as well. One of the places we stayed in had one heating unit right next to the toilet, right next to your legs. I sat on that toilet for as long as I could muster until my right thigh was practically on fire. Because that was the warmest I had been in weeks.
You see the houses are not air tight, there is no insulation, and there is no central heating. Even though there is much talk about weatherizing your house our houses are practically hermetically sealed compared to much of the rest of the world. In countries like Australia and South Africa where it is only cold for a few months or weeks of the year insulation and heating is unnecessary and expensive. So during the night the cold air soaks into the walls and stays in, chilling you inside, even though it might warm outside. Here you just have to dress in layers all the time and find yourself under a blanket for as much time as you can. The only time I have felt completely warm has been in bed, under about four blankets and in newly purchased flannel pajamas. (A word about the pajamas; I never wear the top and bottom of those uber unsexy flannel, 'I got them for Christmas from Aunt Nelda' pajamas. Not that I am opposed to unsexy sleepwear, I am just usually too hot. Pun not intended. I've been wearing them here, and layering them. That's right LAYERING. Not cool underarmor, keep yourself warm camping layering, no, wearing an old maternity tank top underneath, grandma style layering. Ma would be so proud.)
Being this cold in such ‘warm’ places, warm industrialized countries has made be think about how we function as a nation. Even my homes in Southern California, where it rarely drops below sixty degrees, had central heating. Was that really necessary? I was never this cold in California. Will I die if I have to watch TV in a sixty degree home? Not likely. Even in a place like Phoenix the houses are airtight and have some kind of air conditioning or heating. Don’t get me wrong an airtight house is a good thing. If the houses here were weatherized it would much warmer, but since in much of the year you would like the cool breeze they don’t bother. It just makes me wonder, how much money and resources are we using because we don’t want to be uncomfortable?
Posted by Lara Davis Barnett at 6:55 AM