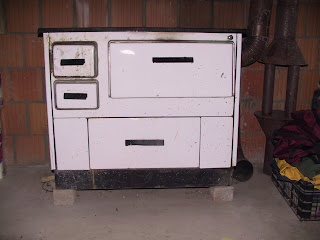 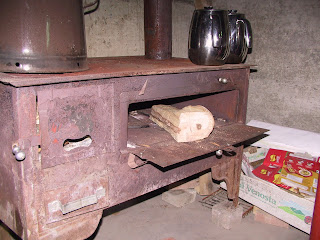 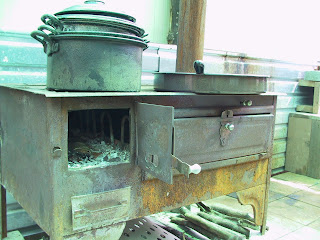 We were invited to Kosovo by an organization called Outdoor Leadership Lab, a group that trains leaders to use the outdoors in their organizations, our job was to teach a backpacking training. Our first two days of our trip were spent in Peje a town of about 250,000 people getting prepared for our trip into the woods.

After getting into Peje we met up with the other overseas workers that would be working with us, Keith and Pam. They took us to lunch at a restuarant that sat on a river. Jokes were cracked about the lack of variety on the Kosovar menus, indeed pizza and salads seemed to the the main feature. I asked what was a more traditional meal. Pam leaned over and carefully read the pieces of the menu to me. Now usually I can look at a menu in a European language and kind of know what I am doing, Albanian was completely lost on me. Q's, J's, S's, and X's stood up on the page, mocking my ability to understand what was in front of me. With Pam's help I picked out a doner sandwich. A likely comparision would be a carne asada burrito, except with yogurt sauce. It was delightfully meaty.
As we walked through a local market after our meal and Jenelle pointed out the local souvenirs I was struck with the appearance of the local women. Most ladies were incredibly 'fashionable.' There was a nary a bootcut jean in sight, but the ones in the skinny jeans probably shouldn't have been in them anyway. Stilettos, lots of makeup, and very 'done' hair were the norm. Jenelle and I certainly stuck out with our flat shoes, blonde hair, and maybe not so tight clothes.

This day our main task was to purchase all the backpacking food for out trip, a job that usually falls to me. It's a job I enjoy but it's a daunting one. Especially in a country with who's food you are unfamiliar. We got to ETC, a Kosovar grocery store, (most Kosovars shop in local small stores, not huge stores like we do) had a macchiato in the adjoining coffee shop and made our plan of attack before we, well, attacked. Since I am often insecure about the amount of food to purchase for an event I would keep checking with Scott if he thought I had enough. Often I would turn around and three or four pairs of hands would be helpfully holding something out to me, causing me to eventually be quite decisive. It was decided that I would dehydrate apples and pears instead of spending the exorbitant amount of money that they wanted for dried fruit. That night Keith and Pam treated us to dinner and we dropped to bed at a more than reasonable hour.
Did I mention that I have never dehydrated fruit before? That morning I woke up, re-googled the process, just to make sure, and started chopping, peeling, and soaking apples in a lemon juice solution. I was going to use a turkish oven, this is a small round electric oven, an adult easy-bake oven, as Pam called it. I placed the slices on an enamel pan popped it in and set the oven on 50 Celsius (after a discussion about conversions), said a silent prayer that this would work and let her go.
After several hours, and a few power outages the apples still looked quite fresh. I lined up another pan and put them in the regular kitchen oven. A gas oven. Gas ovens do not keep and maintain a regular temperature, you have to continually fiddle and adjust to keep from dropping to cold or climbing to broil. I ended up propping the door open to regulate the temperature and keep it low. Jenelle eyed the situation, I looked at her and asked,
"This is going to burn through your gas bomb isn't it?"
"Yep," she nodded. I pulled the slices out and hoped that I could get another batch of apples through the turkish oven before we left for camp the next day.

The different selections of various ovens was a delight to me. In Kenya our stove had one electric burner and three gas burners, that way if your power went out you could cook or if your gas bomb went empty you could still cook. Several homes we were in had cookstoves that were powered by firewood. That's right firewood. The above pictures are all of cookstoves, some at the camp we stayed at and others in homes. You build the fire in the small compartment in the upper left hand corner and the fire heats the larger compartment to the right, and eventually you have cooked food. I was actually completely amazed how well the food was cooked in the skilled hands of the women who used these stoves daily. Being able to count on 350 fahrenheit for forty-five minutes is not a reality but hot cooked food is. I am constantly amazed at the ingenuity of people in other countries, the ways that they have to take care of themselves so that they don't have to rely on an unstable infastructure.
In the end did get all the apples dehydrated, we ran out of time for the pears. Later they became a pear crisp.
These two days that we spent in Peje the water was out for one day and the electricity blinked in and out repeatedly for the forty-eight hours. This wasn't much of a shock to me, that was our reality in Nairobi, I thought, 'Oh, of course that happens here.' A good reminder that what we have here in the US is pretty remarkable.
Posted by Lara Davis Barnett at 1:18 PM