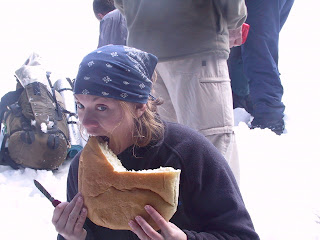 So on Friday one of the families that we working with came up to camp, they brought with them bread that I ordered for our lunches. After eating doner and seeing the cross between a pita and a tortilla that was available I thought this would be a perfect local option for backpacking lunches. As they unloaded four full boxes 45 pie plate sized loaves of bread that looked like something out of biblical times I said to the father of the family,
"You know I was picturing pita bread."
"So were we," he then went on to tell me about the conversations with the bakery where he told them to make it flatter and they, well, didn't. I sighed, reattached my jaw, and thought, 'I am not wholly responsible for this,' and decided that every participant would just carry what they felt they needed. There, solvable problems.
As the day wore on and participants called in to confirm or show up, we started the snowy morning thinking we might have to cancel the trip, but as the sun appeared and stayed we swelled to 17 participants. Fifteen boys and men, me and a teenage girl. Soon it became apparent that our training trip was turning into a Father Son Backpacking trip. Scott and I internally shrugged and decided that we would just try to pinpoint leaders and then deciminate knowledge to them. Or just roll with it and have fun. Maybe a bit of both.
Saturday morning we packed up, I magically saw gear and food disapear into packs. I love backpacking with men, you just hold up something impossibly large or heavy and say, 'Who wants to carry this?' and five sets of hands appear in an offer and desire to prove their strength.
Packs on, adjusted and weighted, we gathered in a circle, I gave the age old 'how to poop in the woods' talk, whle holding a roll of toilet paper. I told them they were lucky to be getting paper, that usually leaves were the method used, or snow. I would be using snow, as the group shivered and shook heads I heard one participant mumble, 'hey if she can do it we can do it.' Indeed. It's brisk, but clean. We prayed and then hiked up into the Mountains of the Damned.
Posted by Lara Davis Barnett at 12:25 PM