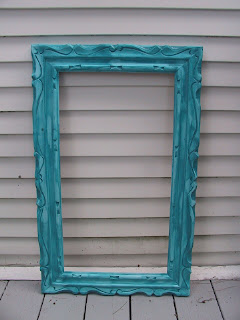 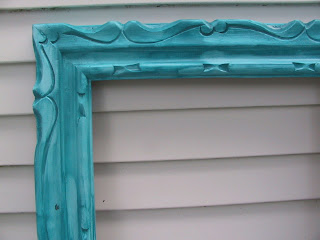 She stood over her dead prey.
She leans forward. She sees something.
Psst!
She is vanquished it is finished.

This was me yesterday. Moving into our own home has put us on a bit of a flurry of Do-it-Yourself projects. Something I have wanted to do for awhile was make my own whiteboard. I have been looking for a fun carved ornate frame that I can re-paint and then insert a whiteboard into. One of the fixtures in our home in Nairobi was a whiteboard on the kitchen wall, where we would jot down all sorts of helpful things, like our grocery list. I'm a fantastic forgetter of things, sometimes it takes me three grocery trips to remember something like toilet paper. So a white board to jot down 'paper towels' when I realise that we are out of one is a life saver.
I've been looking for frames now for awhile. Quite a few spins through thrift stores have turned up nothing. We went to yard sale last Saturday, and there it was a beautiful ugly carved frame for three dollars. (Beautiful carvings, ugly finish)
It's mine now.
After several trips to two different hardware stores and one craft store I finally found an aqua (for the base) and a teal (for the crevices) that would work. The aqua was a little too blue and the teal was a little too green, figured that together they would work.
At the end of the day yesterday I had a sore trigger finger and an aqua frame (also some shelving and a sign for Emma's room in green). I was proud of myself, feeling kinda cocky.

That afternoon we went to Home Depot to buy the white board. I had read on a blog you can buy shower siding, have it cut to size, and that it makes a perfect white board. I asked a friendly Home Depot employee in the kitchen department if she knew if they had shower siding (I know, wrong department, she was the closest one I could find). She said no, but she had counter laminate, and showed it to me. I thought maybe if it was glossy it would work. I told her that I wanted to make a whiteboard out of it. The laminate was textured, not what I wanted. When she said,
"I don't have anything that can get that wet," I smiled, said thanks and moved on, she obviously wasn't catching the vision.
I found someone in the bath department, he showed me his huge pieces of shower siding, and told me he couldn't cut them for me. We left empty handed.
The galling thing is that my bathroom has a bath in it that was obviously DIY, and they have cut pieces of shower siding on the wall. They got it, why can't I?
I googled it later that evening and found another article that referred to the substance that I wanted as melamine. I really don't want to go back into that Home Depot. I'm pretty sure they wouln't have it anyway.
I also googled white board paint...let's just say that if you have to ask you can't afford it.

This afternoon I was eager to do the crevices. I had done this technique before with one of my mother's friends. She showed up one day with a little table some light green paint and a darker spray paint. I ended up with a cute little side table that followed me around for several moves. I put down newspaper, laid the frame down and began to spray. Just a few inches and then wiped. Repeated that process all the way around the frame. It wasn't really working, the paint left seams, and pulled in all the wrong places. The paint dried way too fast and had no movement in it. I realised that if I re-sprayed it would lift it and I could correct some heavy places. Then I saw it was leaving more heavy places. I made myself stop. I was left with a patchy finish.
Later in re-telling this to my husband he asked,
"Did you move it into the shade?"
Duh. It's in the eighties today and by the time I was done I was covered in sweat. Covered. I am sure that the paint was drying too fast and acting up.
I posted pictures above of my patchy frame, I can't decide if it looks cool or just sloppy. Has anyone ever done this before? Have any tips?
Posted by Lara Davis Barnett at 11:33 AM

So, I know they make cool glazes that you can use to put in crevices like this. I have only used it in black to "antique" things but I bet they make it in other colors. I use Ralph Lauren glaze and although it is expensive you only use a little and it goes a really long way. You just put whatever color you want on the base and then paint on the glaze and wipe off as you go. Super easy.

The frame looks fine. Stop 'fixing' it :) Home Depot is frustrating. If one monkey can't help you, go find another monkey. Or go to a Lowes or an OSH. They all hae the same stuff, just different people working there. Ask for 'showerboard' or 'tile board' or 'FRP'. And, yes, they can cut it for you.

To add to Traci's comment, I would tell you to go buy a can of "Tintable glaze" (eek--back to home depot...or another specialty paint store if you want to avoid it:). It is just a clear base and I have read that you can use just a little bit and then add a touch of acrylic paint, which I'm sure you have an arsenal of. Then, voila! a custom colored glaze! Then, like Traci said, just paint it on and wipe it off as you go...it really is easy! :) Another alternative that I have used is called "Rub-n-Buff". Instead of going into the cracks, it highlights the raised edges. You can find it at Hobby Lobby and it is only about $5. It's a small tube, but a little goes a LONG way. Again, you just use a cotton cloth to buff it on...really easy!! Hope this helps:)

Iknow about the glazes, but I was under the impression that you could only get them in black or brown. I looked Ralph Lauren's website and you can get them colored. Nervous about the price, you know? Especially for glazing a $3 frame. I'll try that Rub n' buff stuff might help some of the spots that didn't come out quite right. I'll post a picture when it's done!