Black Friday.  Wow.  So we've come to this.  Two of my friends have posted on Facebook that they have had to head into work in the middle of the night.  Making retail workers above and beyond just so that we can get one dollar appliances?  Wretched. 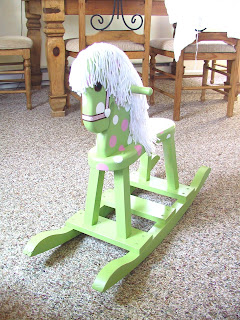 One dollar toasters make me nervous.  If they can sell it for that much does that mean that the rest of the year I am paying far above what the product is worth?  Or are they just banking that you will buy other things that are overpriced once you are in the door?
Nevertheless, we didn't go.  We went for a walk in a nature preserve.  I may have missed fantastic deals on toys for my children, which did make me rethink my strong avoidance of the Friday of Blackness.  Pennies always need to be pinched and getting half off on a Christmas present for my daughter is not something to be scoffed at.

Then I think about what I got Emma last year....
We were wandering around a thrift store looking for deals, I had kept walking hoping to look for clothes for Emma without having to fish her out of the racks.  I realized I had lost my family and backtracked to find them.  I found them in the furniture section.  Emma was atop a dusty rocking horse furiously rocking with a face full of mad joy.  Scott looks up at me, and shrugs.  We bought it. It was decorated in a Southwestern theme circa 1987 and monogrammed for someone who I am sure is now in grad school.  I shuddered at the thought of giving my daughter a Christmas present bought secondhand.
I decided I would lovingly paint it, so that it would be all her own. 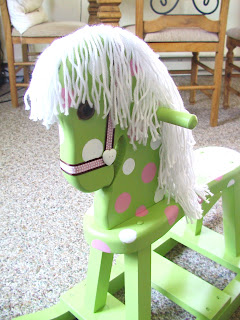 I ripped out the dusty rotting mane.  And then I washed my hands.  I primed it.   Sprayed it with a lovely shade of apple green to match, well, all the other things I've spray painted for her room that I've bought at thrift stores.  I used two different sized bottle caps to trace and then paint white and pink polka dots all over it.  I replaced the brittle crinkling leather bridle with pink and brown polka dot ribbon and white heart shaped buttons (attached with carefully applied tacky glue and hot glue).  Then it sat and sat and sat while I decided how to remake the mane and tail.  I had some bright white yarn that would be perfect for the green, pink, brown, and white theme.  I was still wrapping my mind around how to jam it into the wooden slot that was left by the old mane.  They had taped the mane in one long strip and then stapled it down into the slot.  Lacking modern manufacturing methods and having a staple gun that I know is a wee but wussy I had to think.  Eventually I cut 'even' pieces of yarn, wrapped masking tape around the end and then hot glued them into place.  Then I ran out of hot glue.  The poor rocking horse sat and sat and sat, until finally I used wood glue to glue the rest of the mane in.  I just had to hold it in place for a few second while it adhered, rather than having the instant gratification of hot glue.  I didn't redo the tail, I imagined stapling the yarn to the rear where the old tail was and then wrapping ribbon around it, using hot glue to adhere it.  I didn't though, because I wasn't sure how it would hold; considering that the tail would be right where her bum goes and would get more wear and tear than the rest of the horse. 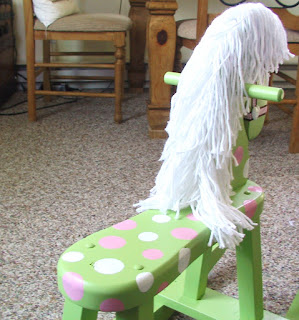 I finished.  I envisioned finding pieces of it scattered around her room as she ripped at ribbon and glue.  I haven't though.  I have found one piece of yarn on the floor in the year that she has had it.
I figured she'd grow tired of it and prefer manufactured toys.  She hasn't though.  I still find her rocking away on it.  She refers to it lovingly as 'my rocking horse.'

The rocking horse was eight dollars, the cans of paint where six dollars each (and I've used them on other projects), the paint for the polka dots I already had, the ribbon I already had, the yarn was a cast off from my mother in law, and the buttons were about fifty cents each.

What will I get her this year?  I don't know.  We're in the process of buying a house and we very well might be moving around Christmas.  A lovingly crafted gift might not be possible right now.  I will probably buy her a toy I've seen her playing with at another person's house or a library book that she keeps asking for long after it's been returned.  I don't think manufactured or homemade matters as long as it's given thinking about what the child wants, not what you think they should want.
Or if it's on a crazy reduced Black Friday sale.
Just saying.
Posted by Lara Davis Barnett at 11:30 AM