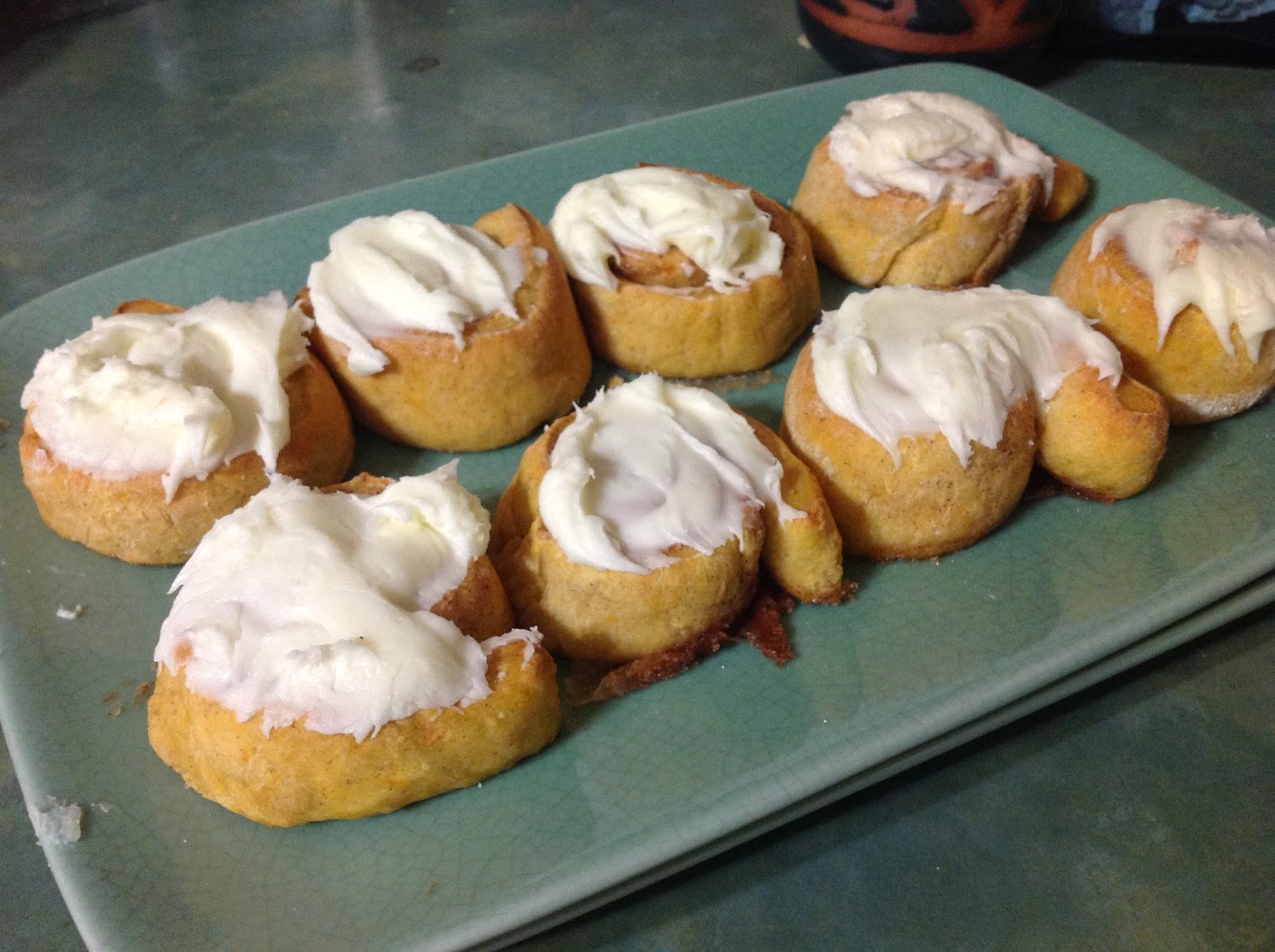 I haven't made cinnamon rolls in a long time.  I used to work at a small coffee shop in rural Colorado and I was a baker there.  Cinnamon rolls were a part of the day.  I mixed the yeast with water and sugar, let it sit on top of the oven, while I made scones and muffins, then I kneaded, beat, rolled, cut, baked, and frosted.  Just part of the day.

I haven't made them in forever, because they are a lot of work.  I was wondering if I would remember how to do it.  But as I rolled my arms and hands remembered all the motions.  As I spread butter, by eyes remembered how much looked right.  As I sprinkled cinnamon sugar I thought, 'looks a little light on the cinnamon.'  When I tasted, indeed it was a little light, but that allowed the flavor of the sweet potato to shine through.  As I turned the dough over into itself to make the 'roll,' my hands found that rhythm, as I cut each bun out of the dough, I remembered the pressure and give in the knife of each slice.

I mopped the kitchen floor when all the dishes were done, when all the buns were frosted.  My muscle memory reminded me that at the end of a long day I had to clean, everything, down to the floor.  I wiped hands on my apron, and turned and spun in the kitchen and remembered the work of a long day.  Lower back told me it was time to sit, time to stop buying cheap shoes, time to be 'all done.'  The rolls and clean kitchen gave me that memory of a job well done.  Money earned.  Customers satisfied.

I haven't felt like that in a long time.  I realized that I am glad for all those hours making coffee, bustling in restaurants, and trying to help people.  The pay was poor.  The treatment abysmal.  But a the end of the day I seemed to accomplish at least something.

Sure I didn't produce anything beautiful or inspirational in those days.  But it was work.

These days are so hard to measure.  Sitting on bedroom floors, just being present so my children don't destroy themselves, cooking food I don't get thanked for, cleaning floors that are dirty moments later, not bothering to dress because no one sees me anyhow....

I hope that one day I can look back and remember these cinnamon rolls and know that all the days I spent wiping boogers, and bottoms added up to something.  I hope that someday when my 32 year old daughter calls me just to talk, that I know that hugging and kissing sad little faces these days will pay off in those days.

Here's the recipe, just in case you were wondering:
Sweet Potato Cinnamon Rolls
1 1/2 cups flour
1/4 cup sugar
1 TB yeast
1 tsp salt
1tsp cinnamon
1/2 tsp nutmeg
1/4 tsp ginger
1/4 tsp allspice
Combine in mixing bowl.
1 cup sweet potatoes (cooked and mashed)
1 cup milk
1/4 cup butter (melted)
Combine a separate bowl.  Mix together.  Add to the dry mixture. Beat until moistened.
1 large egg
Add to mixture, beat at medium speed until incorporated.
2 1/2 cups flour
Add until dough is no longer sticky.  Remove and knead for 7-9 minutes, until smooth and elastic.  Put in greased bowl until doubled in size.  (Couple of hours.)  Punch down and split in half.  Roll into the largest rectangle you can (18x12 - ish).  Melt about half a stick of butter, pour about half of that butter on to the rolled out dough and spread with a pastry brush.  Sprinkle with cinnamon sugar (1/2 cup sugar to about 1TB of cinnamon).  Roll the dough up, either way, depending on if you want big rolls or little ones.  Cut down the roll and bake for about 15 minutes at 375.  Repeat process with the other half of the dough.
Frost with cream cheese frosting.
Adapted from 'Sweet Potato Crescent Rolls' in Simply in Season.