“I’m trying to cut refined sugar out of my diet,” I say, to a friend, as I frost cookies we have just made with our children.
“Are you?” she asks.  I think about all the times in the last months that I have said that to her and realize that she’s right.  There’s been an awful lot of talk from me, but almost absolutely no follow through.
I like the idea of cutting refined sugar out of my diet.  I like the thought of running a clean body, free of pollutants.  I know what I feel like if I eat too much.  Junky.  Sticky.  Icky.  A little gobbed up.
The season Lent is upon us again.  It always seems to sneak up on me; all of a sudden I am supposed to have thought through something that is holding me back.  Keeping me from God.  Stunting my progress as a human being.  In like a day.  This time I had more warning.  This time I have been feeling a bit more out of control.  There are few more things on my mind that shouldn’t be there.
I am kind of obsessed with desserts.  I eat dessert at least twice a day.
I mean that’s kinda bad, right?
I’m not really overweight, so it’s not that big of a deal, right?
There’s always that last five pounds.  But isn’t there always that last five pounds?
I mean, I’ve never broken out in a cold sweat because I didn’t have dessert…I’ve never driven across town to get pastries that I just needed.  I’ve never withdrawn five hundred dollars at one in the morning  to purchase chocolate.
But I have eaten myself to a good stomachache.  I have eaten past where I wanted because I couldn’t stop.  I have not been able to say no. I’ve been under a lot of stress lately and saying ‘no’ has gotten downright near impossible.  That sounds like an excuse.  It is…but let’s face it I have been through a lot in the past year.  Like, a lot.
So I’ve decided to use Lent as a time to show myself that I don’t need desserts.  I can make healthier choices.  I can say no when my belly aches.  I don’t need to know what every dessert on the table tastes like.  I used to be able to say ‘no.’  I don’t need sugar to de-stress.  Or to treat myself.  I am giving up refined sugar for Lent. 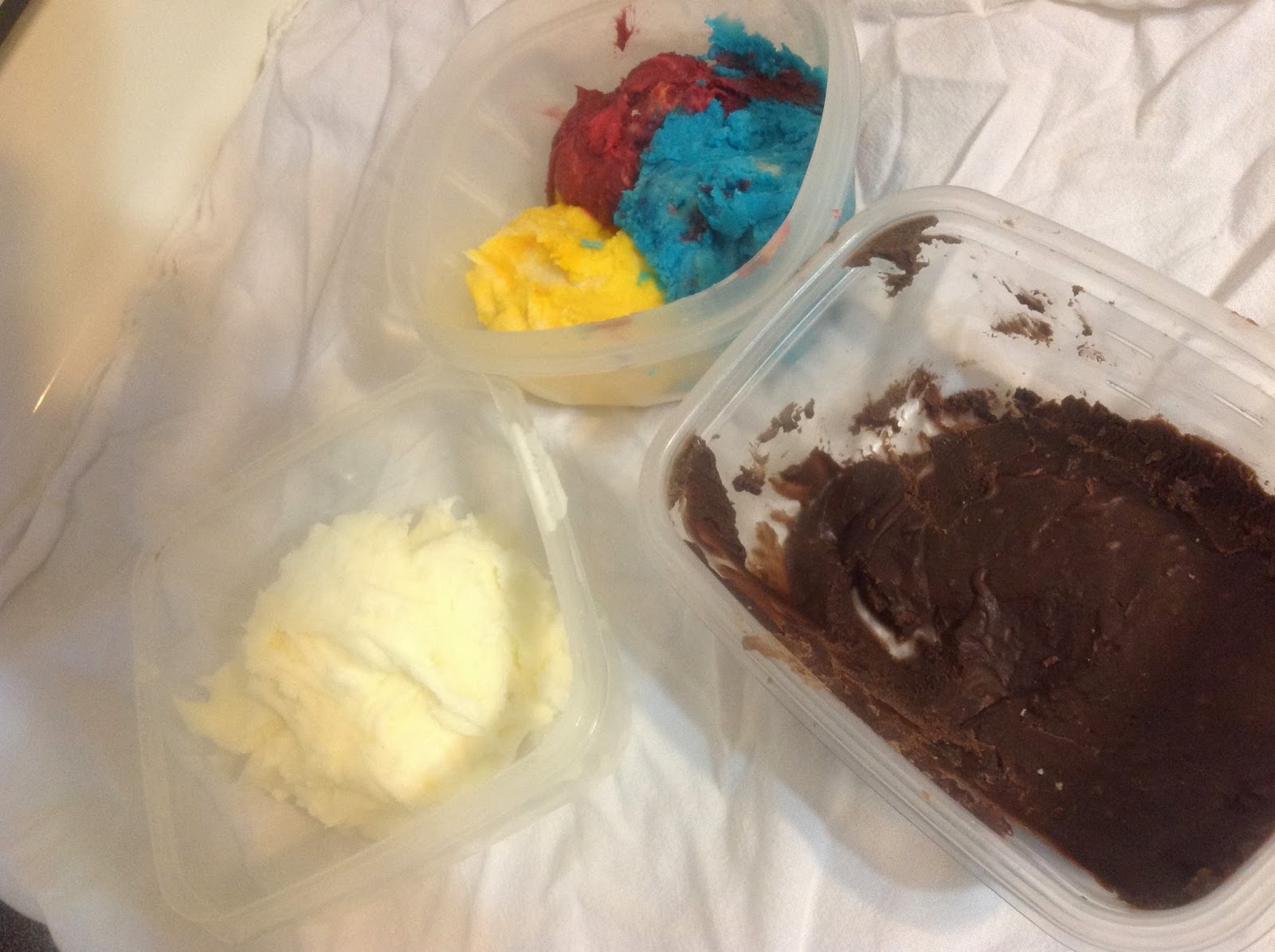 The brown stuff?  Orange Chocolate.  Left over from our Open House.  That was in January.
The colored stuff?  Left over from a friend's birthday party.  I made cookies, the theme was 'Art.'  That's supposed to be red, yellow, and blue.  Didn't quite get to red.  I tried adding a little cocoa powder, you know like you do in Red Velvet Cake, to make it not so pink.  I think I ended up with burgundy.
The white?  Cream cheese frosting from cinnamon rolls that I made for Bible Study.
Because you can't just throw away frosting..can  you?
Yes, you can, Lara, you can.
Well, I can't.
So I have all this frosting left, and I'm gonna give up sugar for Lent.  And I can't just throw it away.
So I made this cake: 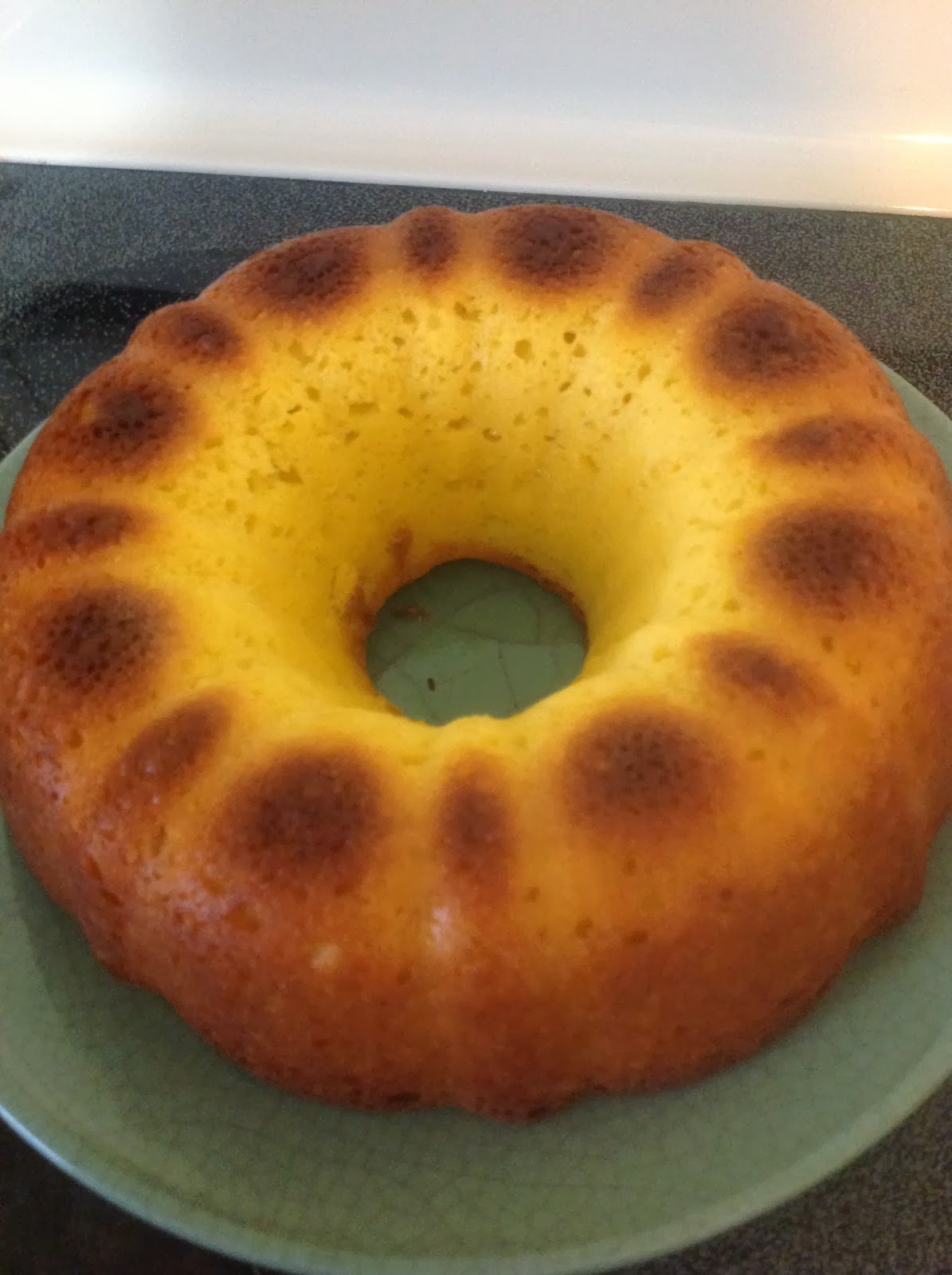 It's a family trick.  My mother in law gave me the recipe, it is one of the few cakes that always turns out amazing.

If I mix the colored icings all together I will end up with a weird poo brown color.  And who wants to eat that?
Besides, we have a guest for dinner, and I can't serve a guest poo brown frosting.
There is not enough cream cheese frosting to cover it.

What is a girl to do?

I mixed the yellow frosting and the cream cheese.

Now I have this:

I did not eat all that cake myself.

No, really, we had a guest for dinner.

Beat it up.
Pour it in a greased bundt pan.
Bake it at 350 for 45 min to an hour.
Feel free to throw in lemon zest as well.  Or to frost with lemon frosting.  (The juice of one lemon mixed with about two cups powdered sugar.)
Posted by Lara Davis Barnett at 6:05 PM