My home is my canvas

I haven't written or painted much in awhile.  I think I have only completed two paintings in the time that we have lived in Massachusetts.  This is a gut sinking fact.  In Colorado I was inspired by my landscape.  While living there I learned to look at the world around me, being surrounded by huge mountains can only cause one to look up and admire the view.  When I would go back home to Southern California I would look up and notice the hills past the freeways for the first time.  I would make conscious decisions to turn my face towards the ocean and to let my eyes soak, instead of taking that vista for granted.

Moving to Massachusetts seemed a bit more of an inspirational challenge.  Being to used to the expansive vistas of the west I was able to draw out beauty and abstract it.  There were very unique aspects of the landscape that were truly Coloradan and truly Californian.  Here the flora is so varied that really the trees are the same from the Mississippi to the Atlantic.  The landscape is a closer and well populated.  I found it more quaint, certainly lovely, but so far I struggle to find parts of the locality that jump out and scream,
"PAINT ME!"

I have felt some inspiration from local flora, maple trees, magnolias, beach grass, and have started plucking away at a few paintings.  I keep waiting for the weather to warm a bit so that I can wander with a camera and see what there is to see.  Without children in tow.

As I rush from room to room of my new house, taking care of the aforementioned children, my thoughts bopping about in my head, I get a little stressed about my future as an artist.  What am I going to paint if nothing inspires me?
Somewhere in there I heard, 'use your house as your canvas.'

If you're like me you're cheap.  Decorating your house is not cheap.  Because I am artist I have art that I can put on my walls, and if I have a blank spot I can always make something.  But somethings I can't make.  Or refuse to make.  Like shower curtains.  Have you ever noticed how expensive those things are?
I mean it's just a big piece of fabric with holes in it, right?

If you're like me you've gone to Target and didn't like all their twenty dollar options.  Or Bed, Bath, and Beyond and all their forty dollar options.  You really don't have time to run into another store while your husband sits in the car entertaining your small children with Veggie Tales videos on his phone...so you take a cue from a HGTV magazine article that you read and decide to paint one.
Do you know how hard it is to find a blank, plain, white shower curtain?
Hard folks, it's hard.
After some searching I ended up with this curtain.  Not being able to touch it, because I bought it online, I was unsure of the texture, but figured I could always return it.  When I received it I realized that it was thin polyester and was unsure of how it would take the paint.  I thought about returning it.  Then I thought,
'Hell, I'm just gonna do it anyway.'
What masterpiece did I have in mind?
Blue and grey stripes.
Um, Lara, there are lots of shower curtains that have stripes on them.
Yes, but they were the wrong color blue and grey.
Um, okay, that's not that big of a deal.
Yes, but if you're like me while you are sitting on the toilet you will stare at them and will them to perfectly match your tile. And they were forty dollars.
Forty dollars isn't that bad.
It is more than I want to spend. So there. 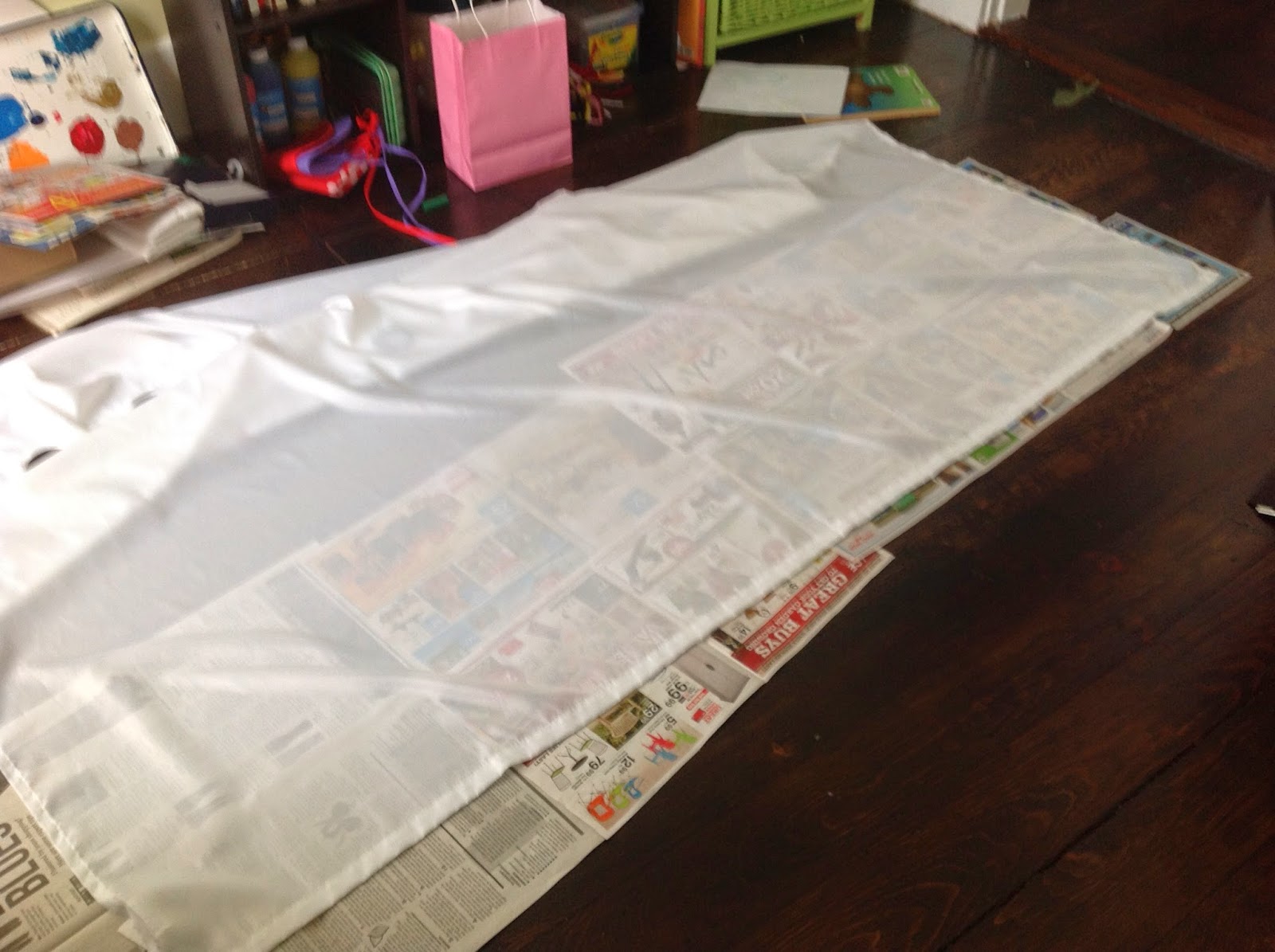 Shower curtain on the floor.
Lara!  On your nice new floors!
Yes, that's why you put the newspaper down. 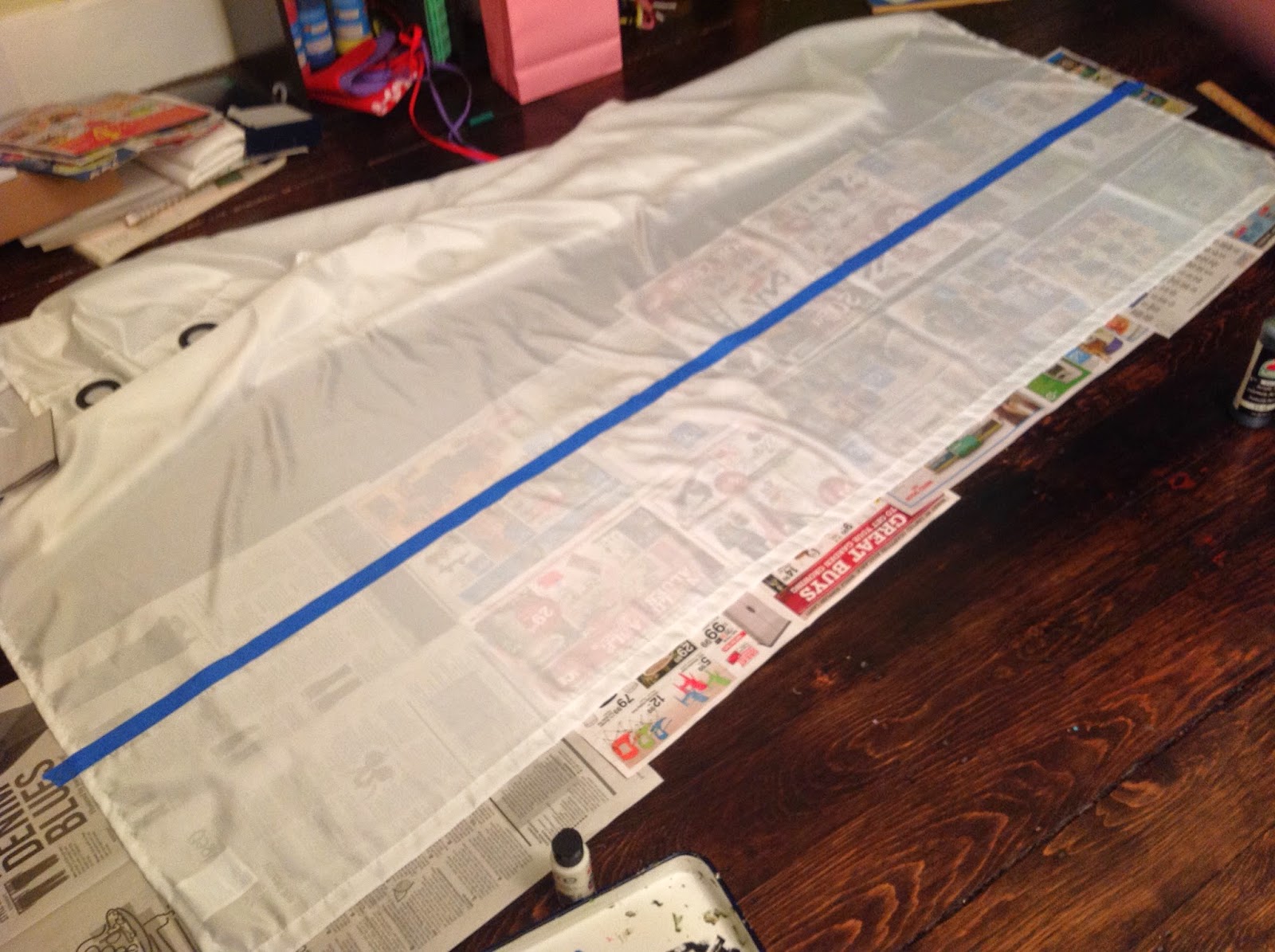 I measured off a section of 12 inches. I used the super scientific method of measuring every foot or so and making a mark (with a water soluble marker) and then stretching the tape between each mark.  I am 100% sure that my stripe is not perfect.  And I don't care.  The thing is going to be all folded up when it's hanging, you will never notice.
I will never notice.
If you notice while you are using my bathroom that's your problem. 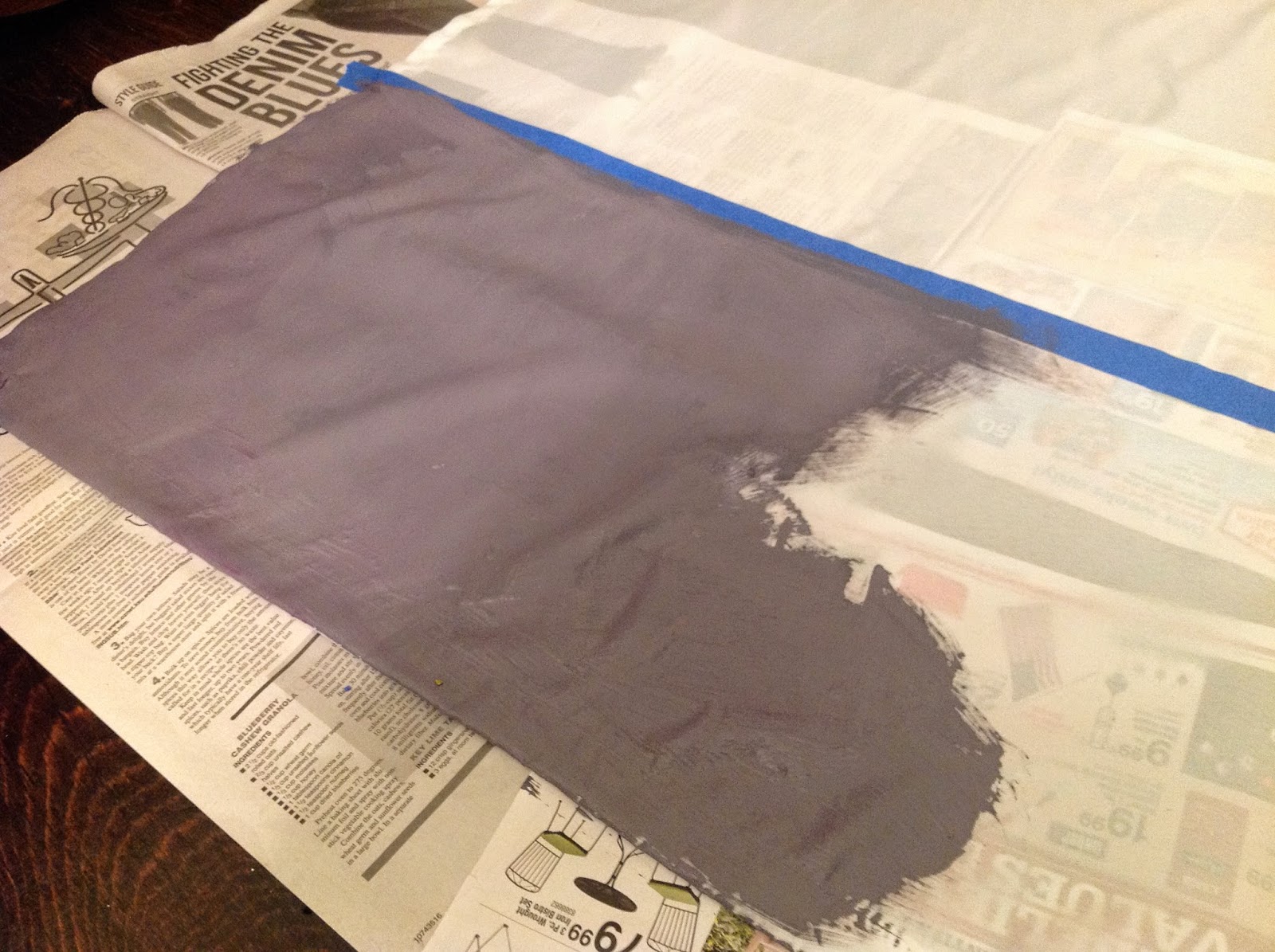 Dark grey that is supposed to match the grey of the bathroom rug that I purchased from Target.
Because I'm high class, ya'll. 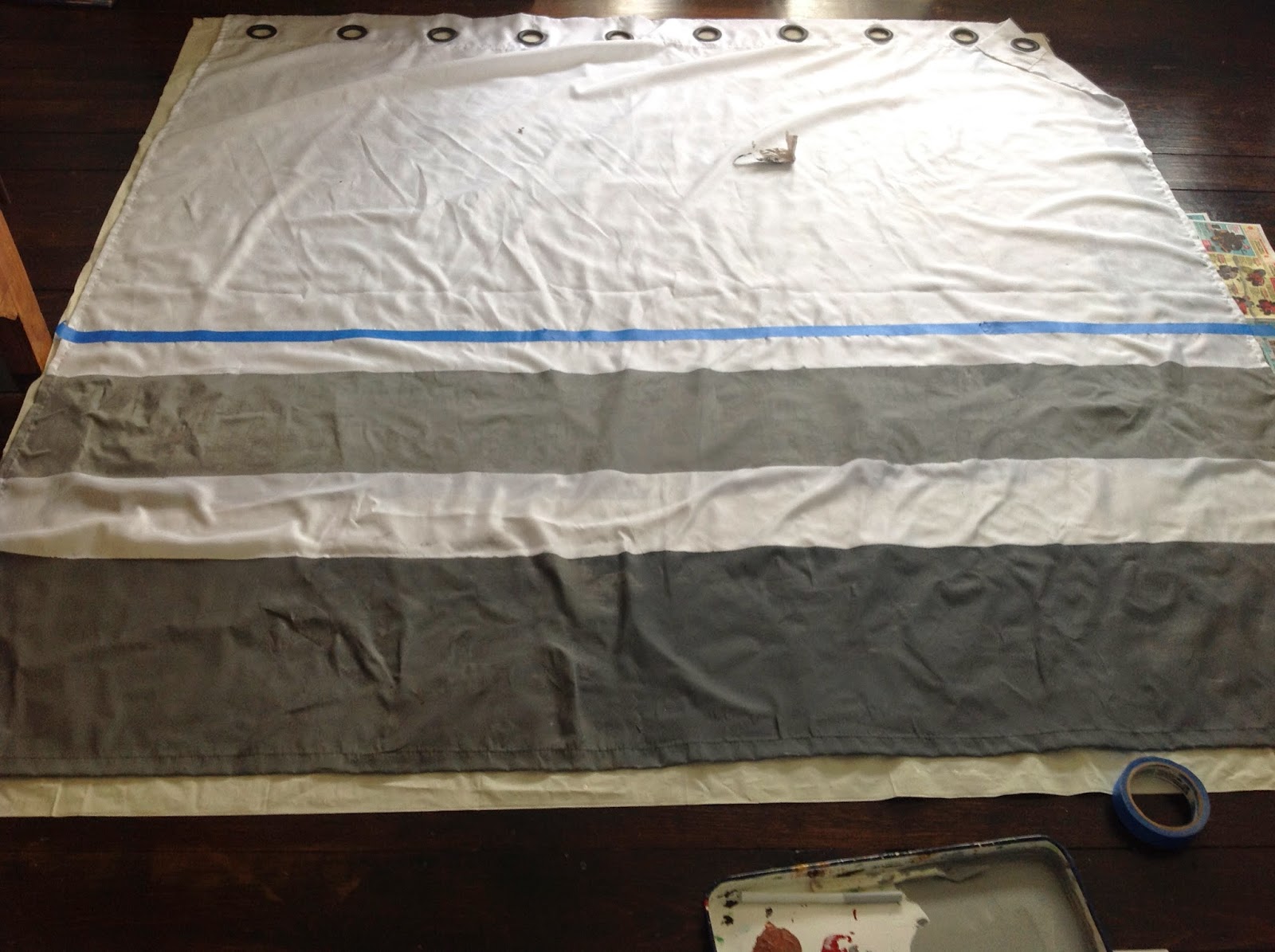 Another reason that I decided to paint a blank shower curtain rather than buy a ready made one was because I couldn't find one that was exactly what I wanted.
I wanted three stripes that went from dark grey to light grey, uniting the bathroom rug and the light grey paint on the walls.  I also wanted the stripes to go from wide to thin. 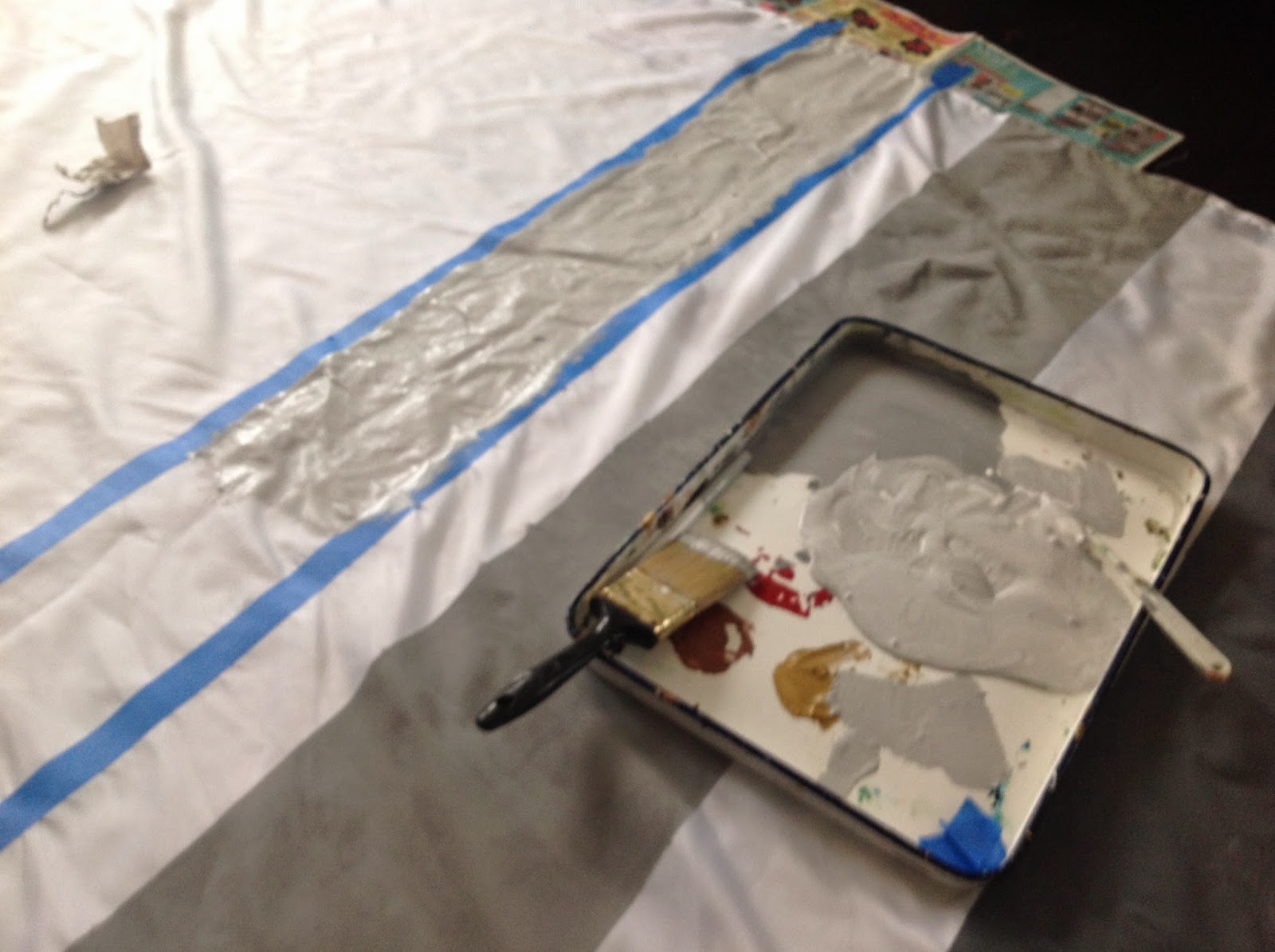 I used Apple Barrel Acrylic Paint purchased from A.C. Moore.  I had a leftover bottle of black from another project, I had to buy some more titanium white.

I started to get slightly worried because the paint was drying very stiff, it was also soaking through the fabric. 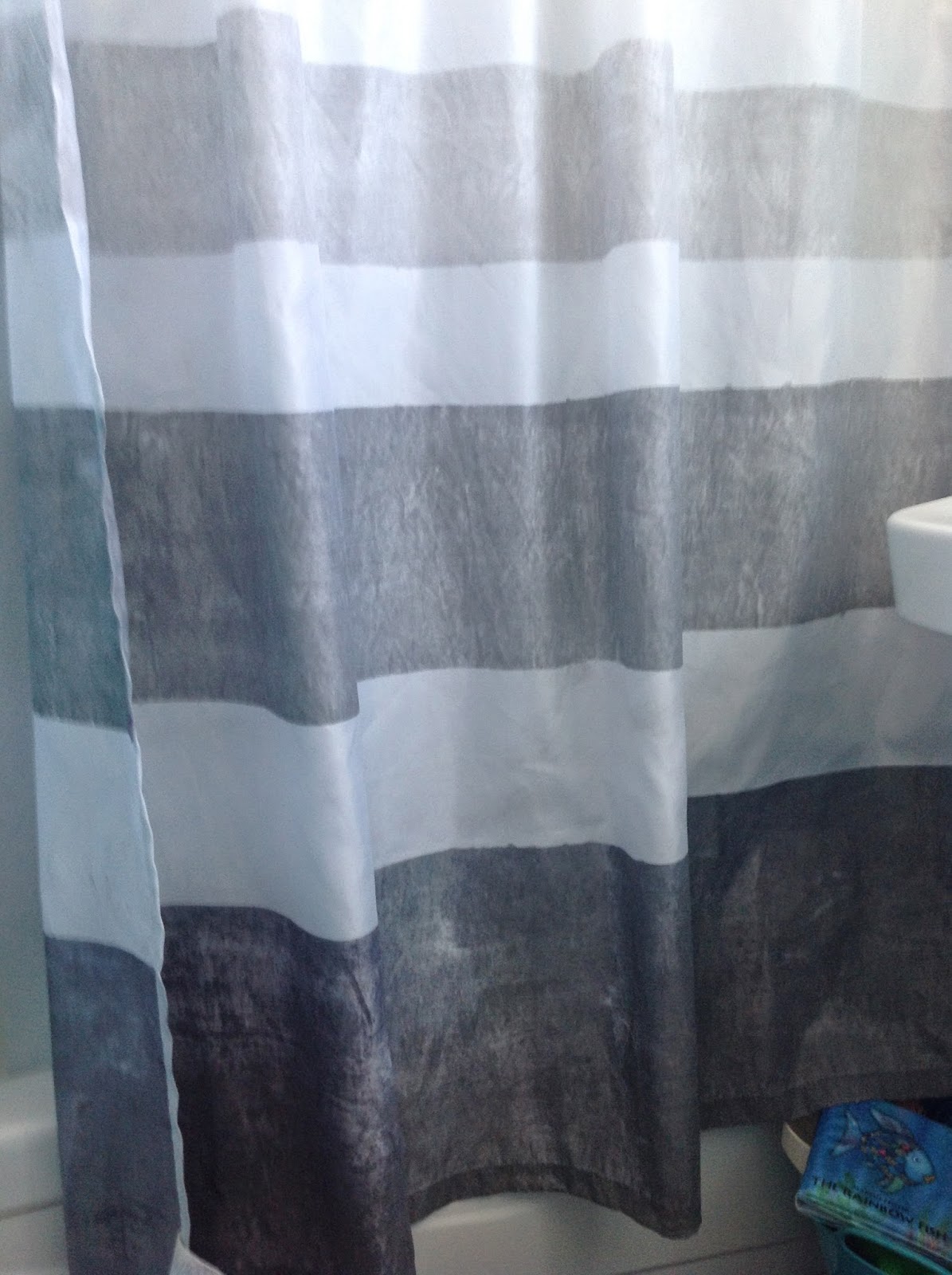 I decided to throw the shower curtain back into the washer, and see what would happen.  I also kinda may have got some spots on other parts of the curtain and was kinda hoping that I could wash those off.
The run through the washer pulled off some of the paint, softening the stiffness, and producing a mottled affect.  At first since it wasn't what I expected so I wasn't sure that I liked the finished product.
Then I decided I didn't want to paint it again.  Or buy another shower curtain.
Besides the more I looked at it the more I liked it.  Since the curtain is polyester and shiny when the paint was removed it allowed the texture of the fabric to show through giving the grey a silver effect.
I like silver. 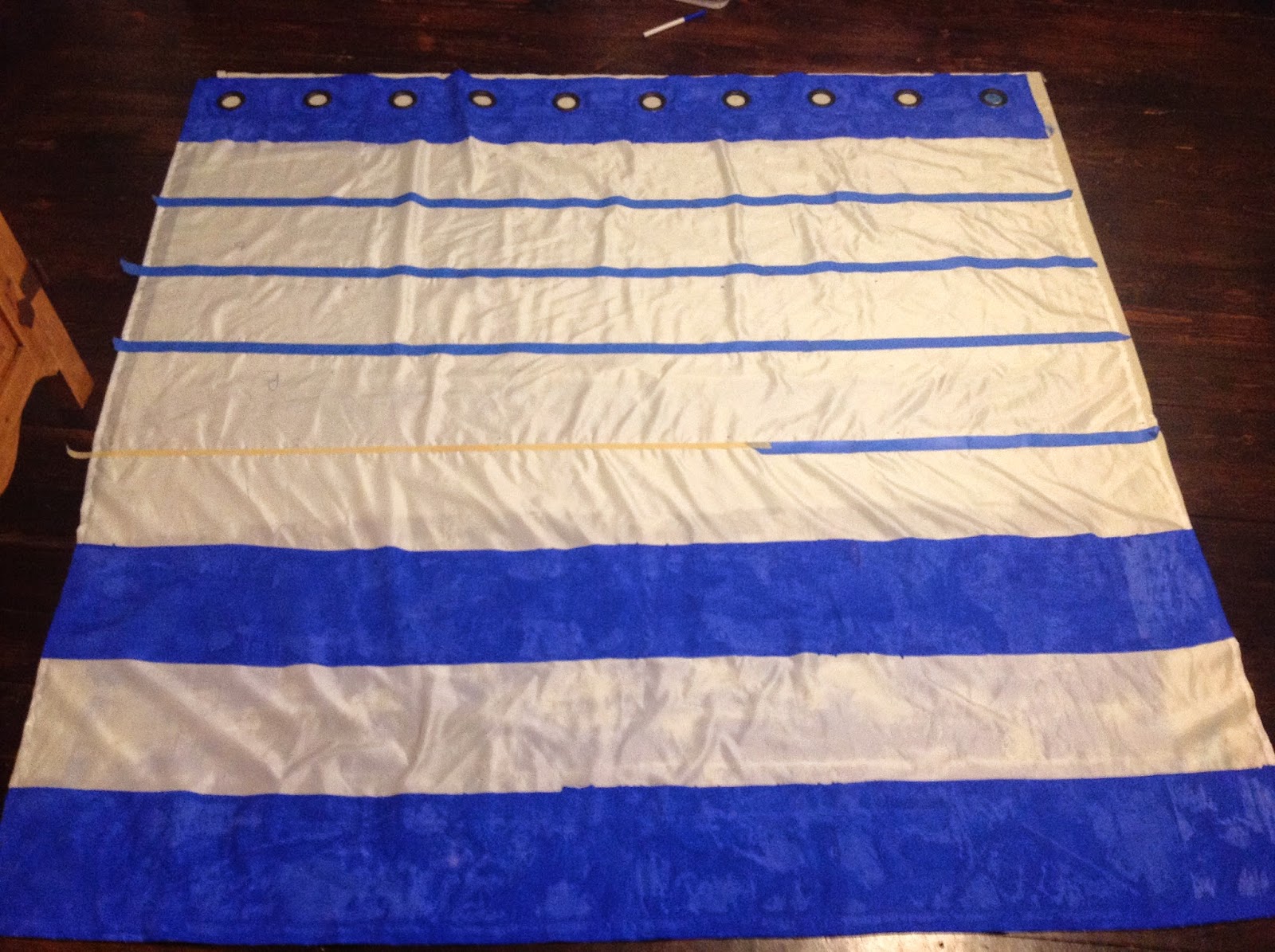 Here is the curtain I did for the downstairs bathroom.  I started by painting the two outer stripes and moving into the center.
Why?
I don't know, it just made sense.
I would not recommend this method, I would suggest if you are doing precise that you tape everything first and then paint.
Why?
Because I got to the middle and realized that the stripes were off.
HAHAHAHAHA, you did your math wrong! 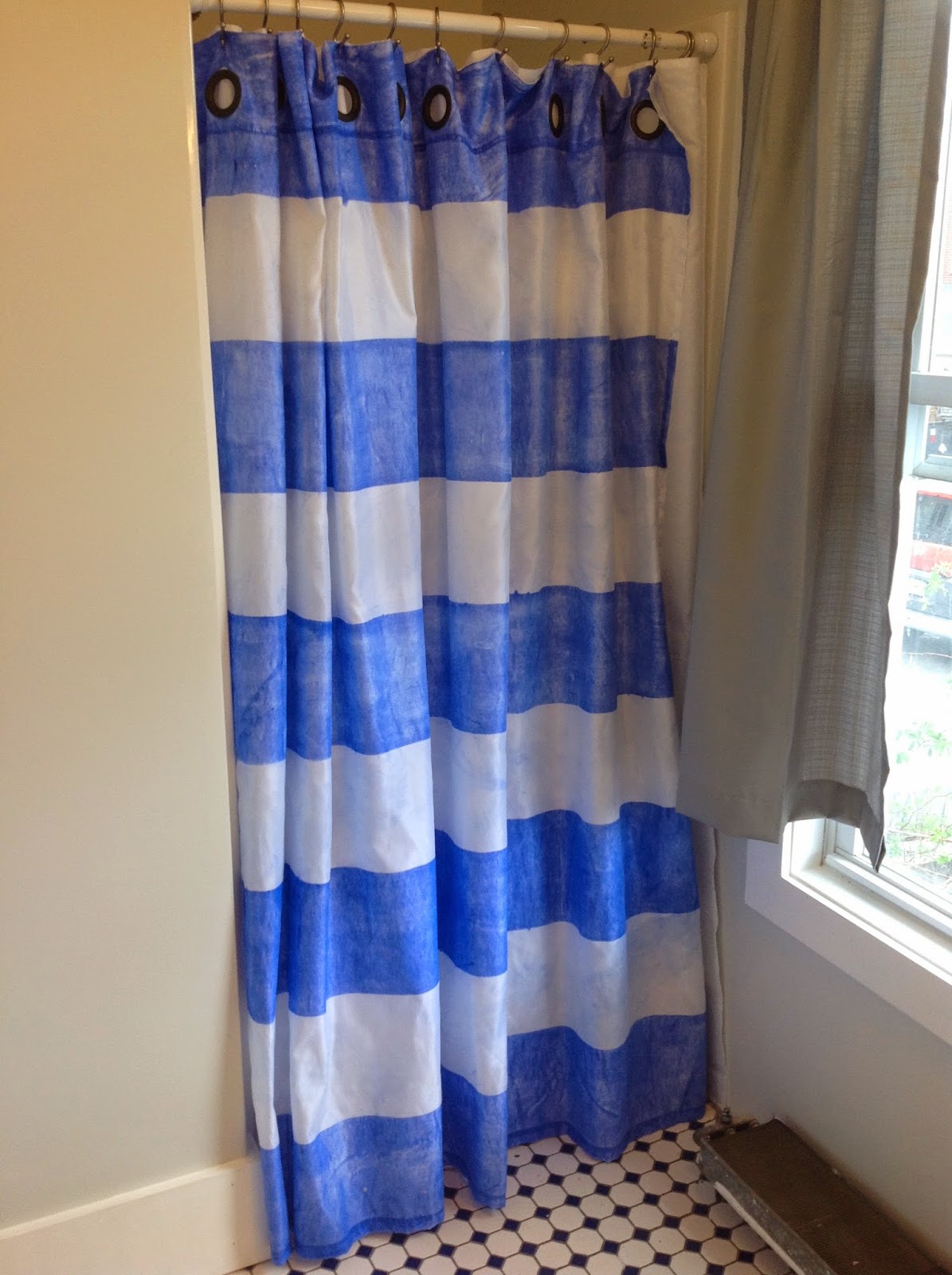 Ahem, I did not.  The shower curtain was two inches shorter than it said on the package.
Normally I would be all insecure and blame myself, but this time it was not my fault.
Anyway, I fudged it and the center white stripes are seven and a half inches rather than eight inches, like the rest of the stripes.  I am pretty sure it's not noticeable.
If you notice while you are using my bathroom that's your problem.

I wonder if this is the longest blog post ever on shower curtains.
I'd like to think it is.
Posted by Lara Davis Barnett at 4:28 PM